Field Tested in British Columbia by our friend Doug B.:

“…they came through our trip beautifully. If you’re looking for a cart that can help you move your canoe or kayak around from parking areas to your lake, and that can also handle some tough trails with a heavy load, this cart can do it. I can definitely recommend these carts, and Paddle People as a supplier.” 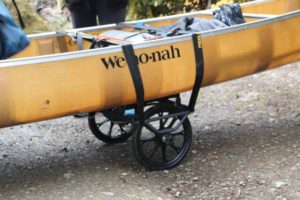 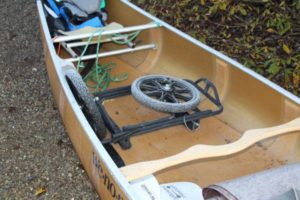 I was getting ready for my second trip around the Bowron Lake circuit in British Columbia. 3 friends and I were going in a little over a week, and I hadn’t found a suitable canoe cart.

The circuit has about 7 miles of portage trails. The first day starts with a 1.5 mil portage out of the parking lot, followed by a 1.5 mile lake. The second portage is 1.25 miles, and I knew from doing this trip before that the first portage trails are rough. There are big holes and tree roots in the trail, and there’s a bit of elevation gain on the first 3 trails.

The rules at Bowron Lakes allow for 60 pounds of your gear, plus a few emergency supplies, and the weight of the canoes.

My prior experience with this trip was with my son’s scout troop. We had 4 canoes, 3 rented, and one that we brought with us. For the canoe we brought, we used a cart that I bought from Cabelas, that had 10″ fat tires, but was really more suited to a kayak than a canoe. The rest of the group used strong canoe carts we rented with the canoes. They were welded steel tube frames with 16″ bicycle tires.

We were probably right around 130-140 pounds on the carts including the weight of the canoes. My Cabela’s cart blew out a bearing on the first or second portage trail. We popped a tire on the second trail, and another tire on the third trail. This place is rough on canoe carts.

Going into this trip for the second time, I knew we needed something better. It was also the off season, so the outfitters were closed and we’d need to bring our own carts.

A month or so earlier, I had sent Jeff at Paddle People a note asking if they had any carts that might be suitable. We chatted back and forth a bit, but at the time he didn’t have anything. The Friday, a week before we were leaving, Jeff texted me a picture of the Mag-Lite SD Airless cart. They had just come in, and was I still looking for something. It was perfect timing, as I had planned on buying some the next day. Jeff shipped 2 of them to me on Saturday, and they arrived on my doorstep Tuesday morning.

I unboxed them and set about putting them together. The only thing I wasn’t sure of was how to space the extra washers. With just a little trial and error, I got the wheels lined up and the carts looked good. I texted Jeff and said they needed a better manual. He said they should put something on YouTube. That night, while going over the very short manual again, I noticed the QR code, which takes you to a video tutorial of putting them together. They’re simple enough that you don’t really need it, but it’s nice that they did the video for you.

Initially, the carts looked like they would do the job pretty well. They are built so the wheels can fold inward, leaving a fairly small footprint for storage or transportation. The surface that supports the canoe runs the same direction as the length of the canoe. They’re padded flat bars. On initial inspection, they looked like they’d do a much better job than the earlier cart I had used.

Setting them up for our first portage, the kick stands worked well, and they were pretty easy to set up. When using a canoe cart on an extended portage, with a decent load, it’s important to set up the canoe correctly. The back of the cart should be centered, and the front of the cart should be forward of the widest part. Once the cart is strapped to the canoe, you should balance the load as close to the center, but make sure the canoe almost balances without the kick stand. By having the forward strap ahead of the widest part of the canoe, as the cart is pushed backward each time you hit a hole or root, the strap will tighten. If you got the strap tight enough to begin with, then the cart won’t slip off the back of the canoe. Make sure you test strap your canoe onto the cart before you leave. One of our canoes is the Wenonah Seneca, a very wide canoe. That canoe took 2 sets of straps tied together to be long enough to hold the canoe to the cart.

We were careful as we went over the bumps, and took them slowly, but with 130 to 140 pounds of weight, it didn’t matter how careful we were, these things were taking a beating. We managed to make it all the way to Isaac Lake on the first day, which finished off the worst 3 portages. That was 6km (3.73 miles) of portaging on the first day.

The next day wouldn’t have any portaging, so we folded down the wheels. The couple in the Seneca decided it worked best to have the cart in the canoe assembled, and then lay gear in between the wheels. For the other canoe, we collapsed it and strapped it on top of our gear. Both methods worked well.

I don’t know how well these carts would hold up if they were put into rental service doing this trip every week, but they came through our trip beautifully. If you’re looking for a cart that can help you move your canoe or kayak around from parking areas to your lake, and that can also handle some tough trails with a heavy load, this cart can do it.

I can definitely recommend these carts, and Paddle People as a supplier.

We bring boats to people and people to water